The Brain on Love

Diane Ackerman on the the natural world, the world of human endeavor and connections between the two.

A RELATIVELY new field, called interpersonal neurobiology, draws its vigor from one of the great discoveries of our era: that the brain is constantly rewiring itself based on daily life. In the end, what we pay the most attention to defines us. How you choose to spend the irreplaceable hours of your life literally transforms you.

All relationships change the brain — but most important are the intimate bonds that foster or fail us, altering the delicate circuits that shape memories, emotions and that ultimate souvenir, the self.

Every great love affair begins with a scream. At birth, the brain starts blazing new neural pathways based on its odyssey in an alien world. An infant is steeped in bright, buzzing, bristling sensations, raw emotions and the curious feelings they unleash, weird objects, a flux of faces, shadowy images and dreams — but most of all a powerfully magnetic primary caregiver whose wizardry astounds. 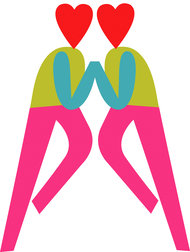 Brain scans show synchrony between the brains of mother and child; but what they can’t show is the internal bond that belongs to neither alone, a fusion in which the self feels so permeable it doesn’t matter whose body is whose. Wordlessly, relying on the heart’s semaphores, the mother says all an infant needs to hear, communicating through eyes, face and voice. Thanks to advances in neuroimaging, we now have evidence that a baby’s first attachments imprint its brain. The patterns of a lifetime’s behaviors, thoughts, self-regard and choice of sweethearts all begin in this crucible.

We used to think this was the end of the story: first heredity, then the brain’s engraving mental maps in childhood, after which you’re pretty much stuck with the final blueprint.

But as a wealth of imaging studies highlight, the neural alchemy continues throughout life as we mature and forge friendships, dabble in affairs, succumb to romantic love, choose a soul mate. The body remembers how that oneness with Mother felt, and longs for its adult equivalent.

As the most social apes, we inhabit a mirror-world in which every important relationship, whether with spouse, friend or child, shapes the brain, which in turn shapes our relationships. Daniel J. Siegel and Allan N. Schore, colleagues at the University of California, Los Angeles, recently discussed groundbreaking work in the field at a conference on the school’s campus. It’s not that caregiving changes genes; it influences how the genes express themselves as the child grows. Dr. Siegel, a neuropsychiatrist, refers to the indelible sense of “feeling felt” that we learn as infants and seek in romantic love, a reciprocity that remodels the brain’s architecture and functions.

Does it also promote physical well-being? “Scientific studies of longevity, medical and mental health, happiness and even wisdom,” Dr. Siegel says, “point to supportive relationships as the most robust predictor of these positive attributes in our lives across the life span.”

The supportive part is crucial. Loving relationships alter the brain the most significantly.

Just consider how much learning happens when you choose a mate. Along with thrilling dependency comes glimpsing the world through another’s eyes; forsaking some habits and adopting others (good or bad); tasting new ideas, rituals, foods or landscapes; a slew of added friends and family; a tapestry of physical intimacy and affection; and many other catalysts, including a tornadic blast of attraction and attachment hormones — all of which revamp the brain.

When two people become a couple, the brain extends its idea of self to include the other; instead of the slender pronoun “I,” a plural self emerges who can borrow some of the other’s assets and strengths. The brain knows who we are. The immune system knows who we’re not, and it stores pieces of invaders as memory aids. Through lovemaking, or when we pass along a flu or a cold sore, we trade bits of identity with loved ones, and in time we become a sort of chimera. We don’t just get under a mate’s skin, we absorb him or her.

Love is the best school, but the tuition is high and the homework can be painful. As imaging studies by the U.C.L.A. neuroscientist Naomi Eisenberger show, the same areas of the brain that register physical pain are active when someone feels socially rejected. That’s why being spurned by a lover hurts all over the body, but in no place you can point to. Or rather, you’d need to point to the dorsal anterior cingulate cortex in the brain, the front of a collar wrapped around the corpus callosum, the bundle of nerve fibers zinging messages between the hemispheres that register both rejection and physical assault.

Whether they speak Armenian or Mandarin, people around the world use the same images of physical pain to describe a broken heart, which they perceive as crushing and crippling. It’s not just a metaphor for an emotional punch. Social pain can trigger the same sort of distress as a stomachache or a broken bone.

But a loving touch is enough to change everything. James Coan, a neuroscientist at the University of Virginia, conducted experiments in 2006 in which he gave an electric shock to the ankles of women in happy, committed relationships. Tests registered their anxiety before, and pain level during, the shocks.

Then they were shocked again, this time holding their loving partner’s hand. The same level of electricity produced a significantly lower neural response throughout the brain. In troubled relationships, this protective effect didn’t occur. If you’re in a healthy relationship, holding your partner’s hand is enough to subdue your blood pressure, ease your response to stress, improve your health and soften physical pain. We alter one another’s physiology and neural functions.

However, it’s not all sub rosa. One can decide to be a more attentive and compassionate partner, mindful of the other’s motives, hurts and longings. Breaking old habits isn’t easy, since habits are deeply ingrained neural shortcuts, a way of slurring over details without having to dwell on them. Couples often choose to rewire their brains on purpose, sometimes with a therapist’s help, to ease conflicts and strengthen their at-one-ness.

While they were both in the psychology department of Stony Brook University, Bianca Acevedo and Arthur Aron scanned the brains of long-married couples who described themselves as still “madly in love.” Staring at a picture of a spouse lit up their reward centers as expected; the same happened with those newly in love (and also with cocaine users). But, in contrast to new sweethearts and cocaine addicts, long-married couples displayed calm in sites associated with fear and anxiety. Also, in the opiate-rich sites linked to pleasure and pain relief, and those affiliated with maternal love, the home fires glowed brightly.

A happy marriage relieves stress and makes one feel as safe as an adored baby. Small wonder “Baby” is a favorite adult endearment. Not that romantic love is an exact copy of the infant bond. One needn’t consciously regard a lover as momlike to profit from the parallels. The body remembers, the brain recycles and restages.

So how does this play out beyond the lab? I saw the healing process up close after my 74-year-old husband, who is also a writer, suffered a left-hemisphere stroke that wiped out a lifetime of language. All he could utter was “mem.” Mourning the loss of our duet of decades, I began exploring new ways to communicate, through caring gestures, pantomime, facial expressions, humor, play, empathy and tons of affection — the brain’s epitome of a safe attachment. That, plus the admittedly eccentric home schooling I provided, and his diligent practice, helped rewire his brain to a startling degree, and in time we were able to talk again, he returned to writing books, and even his vision improved. The brain changes with experience throughout our lives; it’s in loving relationships of all sorts — partners, children, close friends — that brain and body really thrive.

During idylls of safety, when your brain knows you’re with someone you can trust, it needn’t waste precious resources coping with stressors or menace. Instead it may spend its lifeblood learning new things or fine-tuning the process of healing. Its doors of perception swing wide open. The flip side is that, given how vulnerable one then is, love lessons — sweet or villainous — can make a deep impression. Wedded hearts change everything, even the brain.